To protect the health of our staff and our customers, Efficiency Vermont offices are closed to the public. We have cautiously begun scheduling project related site visits when required. You can find more information on our safety protocols here.

We know that you need support in reducing energy costs now more than ever, and we will continue to launch new offers and programs over the course of the summer. In the mean time, our customer support team is available to help you remotely. Contact us at (888) 921-5990 or info@efficiencyvermont.com.

Chris Kesler and the Black Flannel Brewing Company team are committed to starting a business that lives the team’s sustainable values. The team opened the brewery-distillery-brewpub at The Essex Experience in early July 2020. They want to minimize the impact on the planet and commit to sustainability from day one. But economic sustainability is equally important. They want to create a business that can become a fixture of the community.

Chief brewer Dan Sartwell watched his former employer, 14th Star Brewing, save thousands of dollars each year through efficiency investments. “Brewing is an energy- and water-intensive process. If we commit to economic and environmental sustainability, we have to look at the energy we are using to make our beer.”

In high quality beer making, the wort (the mix that will eventually turn into delicious beer) must be cooled from boiling before it can be fermented. One of the biggest energy users and operating expenses for a brewery is the chiller.  Brewery chillers are cooling units that utilize glycol to extract excess heat from a brewing process and dissipate it in a heat exchanger or refrigeration system. Typically, a chiller runs all day every day to keep the brewing process going. Many brewers use oversized, inefficient chiller systems that are based on rough sizing estimates to provide the cooling power necessary.

We referred them to a few Vermont based suppliers of high efficiency chiller systems, and they chose a system designed by Huntington-based Dodge Engineering & Controls (DEI). The model uses high-efficiency components and innovative controls to efficiently cool the beer. DEI’s detailed analysis revealed that Black Flannel could be served by a smaller system than they’d originally thought. The smaller chiller can even handle the brewery’s three walk-in coolers. Dick Soule Refrigeration, from Enosburg, integrated the chiller with the coolers to complete the highly efficient cooling system.

Finally, to keep the team informed and accountable, they installed meters. With the meters they will be able to see the electric use and efficiency of the chiller system. This will help them identify maintenance issues quickly and share their findings with others in the brewing industry.

All told, the new system is estimated to save Black Flannel $11,243/year in energy costs.

VGS immediately saw an opportunity in the brewpub's kitchen. They recommended a highly efficient kitchen hood with demand control ventilation. It only runs when particulates in the air reach a certain level, saving energy while maintaining air quality. VGS and Efficiency Vermont combined their incentives, since the hood will save on both natural gas and electricity. Together, Black Flannel offset more than 50% of the upfront cost of the new equipment.

“Black Flannel was engaged in this process from day one,” said Mike Gifford, Commercial Efficiency Innovation Lead at VGS. “They maximized their savings because they took the time to ask the right questions early and often. Following this model, we look forward to helping other breweries and restaurants do the same.”

These efficiency investments will save Black Flannel over $9,600 on natural gas each year.

Efficiency from the bottom up

Black Flannel’s business design has efficiency baked in. A distillery requires a lot of the same equipment and process as a brewery, for grain-based alcohols. By basing both out of the same business, Black Flannel only needed one system to create the mashes for the brewery and the distillery. This cuts their energy use for the processes in half.

In fact, there’s not much about the equipment and processes the Black Flannel team invested in that isn’t efficient. Variable frequency drives (VFDs) on their pumps will allow them to run only as much as needed. Dimmable LED lights with motion-sensors have been installed throughout the facility. They’ll turn on only when needed and provide welcoming light with LEDs that have a much longer lifespan than other lighting choices.

Even the location supports the mission. Peter Edelman owns The Essex Experience. In 2018, he worked with Encore Renewable Energy to make the complex 100% solar powered. He’s eager to help his tenants reduce their carbon footprint, including helping Black Flannel weatherize the business before they moved in.

“Black Flannel will be one of the most energy efficient brewers and restaurants in the state,” said Pat Haller, Senior Energy Consultant at Efficiency Vermont. “That wouldn’t have happened without their engagement from day one and their willingness to work in collaboration to find innovative solutions at every level of their business.” 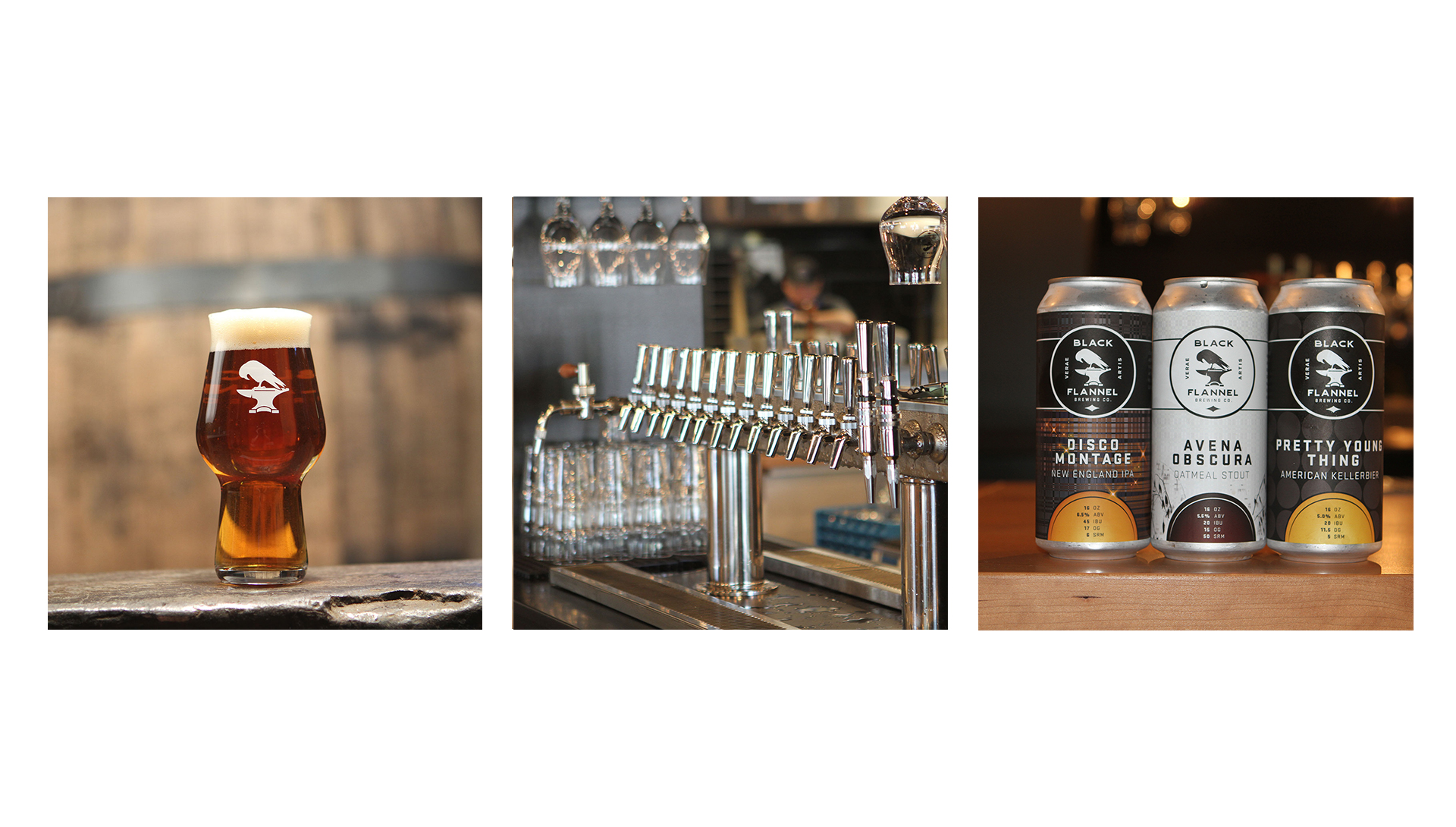 In all, these improvements will help Black Flannel save almost $24,000 each year on energy costs.

Due to the on-going COVID-19 restrictions on restaurants, Black Flannel’s opening in July wasn't exactly what they initially planned. They have more seating outdoors and space for social distancing. Their kitchen is focusing on take-out. They’ve also decided to can more beers than they had originally planned to.

But Kesler, Sartwell, and the rest of the team are excited to turn the efficient machines on and put them to their intended use.

“There are some really good breweries in Vermont. We plan to be among some of the best,” shares Kesler with a modest chuckle. “But we’re also aiming to create a unique experience for our customers to help them learn more about beer and the process of making it. I’m excited about sharing our passion and our love for brewing and tasting beer with other people.”

Sartwell echoes the sentiment. “It’s going to be a really cool place to hang out and have a beer. I can’t wait to sit at the bar with all of our guests and enjoy talking beer with them.”