Efficiency Vermont worked with partners at Dynamic Organics and Green Mountain Power to help a customer find a better way to use electricity. This successful project paved the way for an innovative new pilot program that is bringing national attention to Vermont, and earned the project partners an award from the Peak Load Management Alliance.

The Brattleboro Retreat (The Retreat) is a not-for-profit, regional mental health and addiction treatment center. Energy costs make up a lot of their operating expenses, so finding ways to reduce energy costs frees up more money to care for patients.

As with hundreds of Vermont’s large energy users, Efficiency Vermont has a close working relationship with The Retreat. In recent years, we’ve worked with facility manager John Sohl to support The Retreat’s investment in energy upgrades.

During the course of his regular visits with John, Efficiency Vermont Energy Consultant Marcus Jones learned about an unusual component of The Retreat’s cooling system: three shipping container-like boxes behind The Retreat’s campus. They are connected by pipes and valves to an electric chiller unit.

John, who’d only recently arrived at Brattleboro Retreat, started looking more carefully at this system with the help of Morgan Casella, a founding partner of Putney-based energy consulting firm Dynamic Organics.  They learned it was a legacy system from the 1990s and that it could provide chilled liquid to two of The Retreat’s buildings, as well as make large amounts of ice and store it in the containers for several hours at a time.

As John, Marcus, and Morgan began comparing notes and ideas, their interest in the existing system intensified. This was the beginning of a team effort to investigate the big-picture possibilities this cooling system might present to Brattleboro Retreat, and to the electric grid that serves it.

The team knew that the ability to cost-effectively store electricity is an important component of a modern power grid. For more than a century, the electric utility industry has been in the business of providing exactly as much electricity as its customers need, the instant they need it.

Striking the right balance between electricity supply and demand is expensive because demand for power fluctuates dramatically. This is especially true during heatwaves and cold snaps when customers are using power to keep their homes and businesses comfortable and productive. Utilities must build a grid that can meet the highest demand, even though that “peak” demand only occurs for a small percentage of the time. The rest of the time, the system is essentially overbuilt. It’s like a family of four living most of the year in an 8-bedroom house, because a few days a year they need the extra room to host their relatives.

This model of meeting “peak” electricity demand has placed a premium on energy resources that are “dispatchable.” Dispatchable energy refers to sources of electricity that can be used intermittently and turned on and off according to market needs, providing electricity in an instant.

Dispatchable electricity sources typically run on fossil fuels like natural gas and oil. This has a negative environmental impact. While more and more clean renewable energy sources like solar and wind are now connected to the power grid, they are not dispatchable. Sometimes there is more solar or wind than customers can use. Other times there isn’t enough to meet demand and fossil fuels are needed to fill in the gaps.

The ability to store renewable electricity would make it dispatchable. This would allow utilities to “harvest” and store electricity when nature is providing it in abundance and draw on that storage later when demand increases, or peaks.

Energy storage is one of the keys to “decarbonizing” the power grid, by allowing stored renewable energy to be available during times of peak demand, offsetting the fossil-fuel

The project: Use the system to store energy and decrease peak demand

There are many ways to store energy, including lithium-ion batteries and storing heat, or cold. In fact, storing thermal energy created by electricity can have the same effect as storing electricity itself.

Morgan, Marcus, and John were considering the possibilities that The Retreat’s cooling system might present. While it couldn’t store electricity, it could store thermal energy in the form of ice. The ice could be used to cool the buildings later in the day and avoid adding to peak demand on the electric grid.

To unlock the potential, the team needed to better understand how the chiller system worked, and how to control it with precision. 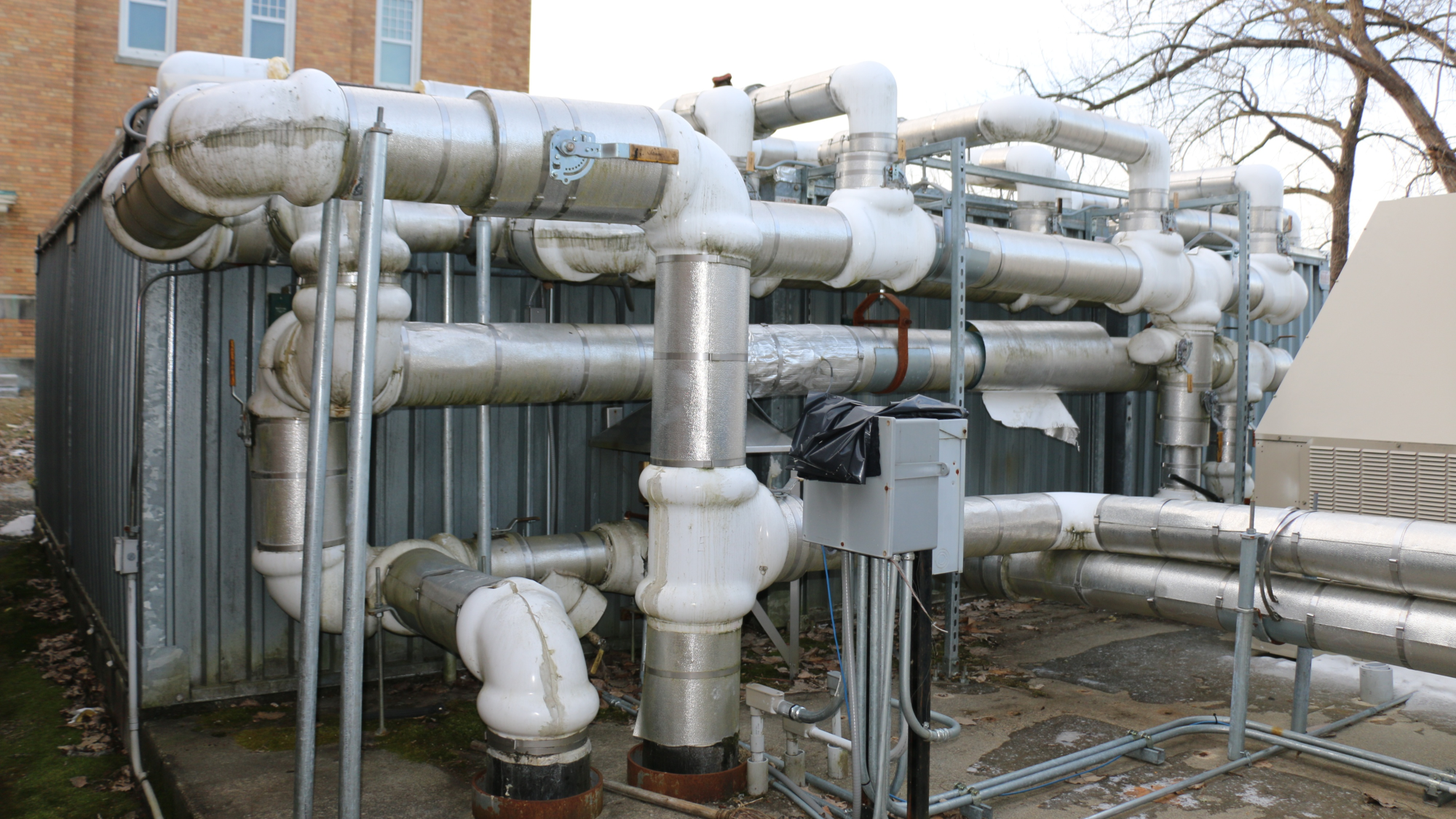 Caption: A closer look at the Brattleboro Retreat’s chiller and ice storage system.

Morgan took the lead in investigating the system and developed process and instrumentation diagrams. He discovered that the system was making and storing enough ice to delay, or shift, the use of 3.2 megawatt-hours electricity. But the way the system was configured, the ice was not being used to cool the buildings. This meant that the power consumed to make the ice was going to waste.

As John put it when I visited him earlier this year, “We were purchasing all of this electricity off the grid to make ice that was then sitting in storage containers and melting away. Information is power – Efficiency Vermont and Dynamic Organics were able to bring this to our attention, and we could cut our electric bill way down just by turning off the ice maker. But we decided not to.”

Without spending a dime, Brattleboro Retreat could have shut off the icemaker and saved energy. Efficiency Vermont would have fulfilled its obligation to achieve electricity and cost savings for its customer.

But to the trio’s credit, John, Marcus, and Morgan saw the bigger picture. They understood that the value of using this system to help decrease peak demand could eclipse the value of just cutting off the ice flow. They could save Brattleboro Retreat money, they could save Green Mountain Power customers money, and they could reduce carbon emissions.

They had discovered a big battery connected to the grid. And they’d figured out how to use it. It was time to call Green Mountain Power.

The result: A successful demonstration and $24,000 in annual savings

Green Mountain Power developed a pilot rate structure that would align the grid and customer benefits from this type of flexible load management. This gave Brattleboro Retreat a financial incentive to utilize the ice storage system to reduce their peak use, in a way that would be more beneficial than simply shutting down ice production.

In late June of 2018, long-range weather forecasts were calling for an early heatwave in New England. The first peak event of the summer was around the corner.

“Green Mountain Power called and said, ‘Can you be ready with the storage system in two weeks?’” recalled Morgan.

It would be a scramble, but the team committed to making sure system would be ready.

Through this collaboration, the Brattleboro Retreat reduced its peak energy demand by more than 115 kilowatts (kW) during the cooling season. We estimate that The Retreat will save about $13,500 per cooling season by shifting their time of use off peak.  They will also save an estimated $10,500 a year by reducing their overall power usage from energy efficiency improvements made as part of the project, for a combined annual savings of approximately $24,000 a year.

The path forward: More customers and a greener grid

The success at Brattleboro Retreat laid the groundwork for a pioneering new pilot program that Green Mountain Power launched earlier this year. The Flexible Load Management pilot seeks to replicate the work at The Retreat with other types of customers. Efficiency Vermont is supporting the pilot by leveraging its extensive relationships with large energy users in the state, and the familiarity we have with their operations, to look for 10 large customers to join the pilot.

The concept of flexible load management is powerful; it could be one of the keys to unlocking the full potential of renewable energy resources and making the electric grid carbon-free. The pilot project will investigate how to turn that concept into practice.

We know that Brattleboro Retreat was an unusual case. It already had equipment designed to store thermal energy. It will require even more creativity to find other opportunities with large Vermont customers. But the project demonstrated that storing thermal energy to shift electricity away from system peak times can work. And Dynamic Organics, also a partner in the pilot, developed the data analytics and control systems that can now be used with other customers.

We’re excited to partner with Green Mountain Power to decarbonize the power grid, and reduce expensive peak demand use to save all customers money. It’s an exciting glimpse into the future, and a real-time example of how we might cost-effectively modernize the grid.